What Are the Costs of the Government Shutdown?

The longest government shutdown in U.S. history ended after 35 days on January 25, 2019. A temporary appropriations bill extended funding for all shuttered federal agencies to February 15, 2019, while a bipartisan committee negotiates a new spending bill for the Department of Homeland Security.1

The full impact of the shutdown will not be known for months, but official estimates have been released, and it may be helpful to look at the estimated cost to the U.S. economy, as well as the effect on public safety and other government services. 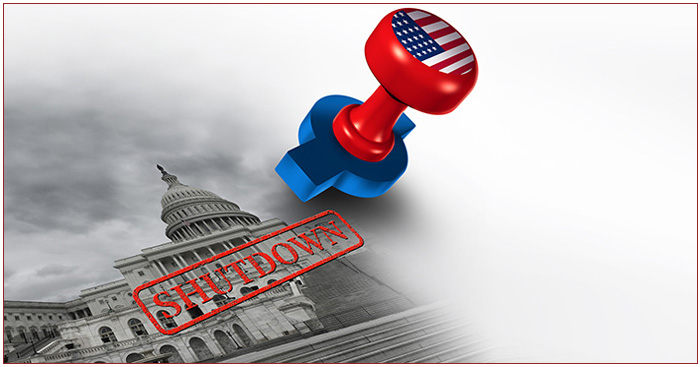 The shutdown began on December 22, 2018, when funding lapsed for nine cabinet-level departments — agriculture, commerce, homeland security, housing and urban development, interior, justice, transportation, Treasury, and state — as well as a number of other government agencies.2

All federal employees will receive full back pay as soon as possible — many by the end of January — but about 1.2 million government contractors had no guarantees and may lose income permanently. It has been estimated that contractors faced more than $200 million a day in lost or delayed revenue.6–7

Missing paychecks was a hardship for many families and especially difficult on lower-paid essential workers. (Furloughed workers in many states could apply for unemployment benefits or seek other employment opportunities.)

The most visible manifestation of this issue was increased absences by Transportation Security Administration (TSA) workers. On January 20, the absentee rate for TSA airport screeners was 10%, up from 3.1% on a comparable day last year. According to the TSA, many workers took time off for financial reasons, such as an inability to pay for child care or transportation. Increased absences resulted in long lines, delays, and gate closures at some airports.8

Air traffic controllers, who are better paid, remained on the job without pay and normal support staff. However, on January 25, an increase in absences by controllers temporarily shut down New York’s LaGuardia Airport and led to substantial delays at airports in Newark, Philadelphia, and Atlanta. This may have been an impetus to reopen the government later that day.9

Other public safety employees who worked without pay include the U.S. Coast Guard, customs and border protection agents, and law-enforcement officers at the Federal Bureau of Investigation, U.S. Marshals Service, Drug Enforcement Administration, and Bureau of Prisons.10

While essential workers maintained some federal services, furloughed workers left significant gaps. National parks were closed or understaffed, resulting in lost revenue, vandalism, and mounting trash.11 Many federal services were delayed or suspended, ranging from food inspections and civil court cases to consumer protection services, rural home loans, and federal reports used for everything from projecting the economy to deciding what crops to plant.12–16

The IRS called back 26,000 furloughed workers to process tax refunds, but almost 14,000 of them had not reported as of January 22. The IRS is understaffed under normal circumstances, and it may take time to get up to speed, adding to the challenges of processing returns that reflect changes in the new tax law.17 About $2 billion in tax revenue may be lost as a result of reduced IRS compliance efforts during the shutdown.18

According to the nonpartisan Congressional Budget Office (CBO), an estimated $18 billion in government spending was lost or delayed during the shutdown. This includes $9 billion of direct spending on goods and services and $9 billion in compensation for federal employees. Assuming the government stays open, most of this is expected to be recouped over the next eight months, but $3 billion in gross domestic product (GDP) may be permanently lost.19

Three billion dollars is a tiny fraction of total U.S. GDP — about 0.02% — but quarterly GDP growth may take a larger hit. The CBO projects an annualized loss of 0.2% growth in the fourth quarter of 2018 and 0.4% in the first quarter of 2019. So the CBO’s pre-shutdown estimate of 2.5% annualized growth in the first quarter would be reduced to 2.1%. GDP growth may be 1% higher than expected in the second quarter.20

Even if delayed spending is recovered, lost productivity by furloughed workers and government contractors will not be regained.21 Consumer confidence dropped in December and January due in part to the shutdown, but may rebound if the government remains open.22 A longer-term concern is the potential loss of federal workers, including those who leave for other opportunities and qualified candidates who may look elsewhere due to doubts about the future stability of federal jobs.23

It remains to be seen whether all government agencies continue to operate with full funding after the February 15 deadline. If so, the long-term economic costs of the shutdown may be relatively small, but the impact on individuals who fell behind financially or missed out on government services could be significant.

This information is not intended as tax, legal, investment, or retirement advice or recommendations, and it may not be relied on for the purpose of avoiding any federal tax penalties. You are encouraged to seek advice from an independent professional advisor. The content is derived from sources believed to be accurate. Neither the information presented nor any opinion expressed constitutes a solicitation for the purchase or sale of any security. This material was written and prepared by Broadridge Advisor Solutions. © 2019 Broadridge Investor Communication Solutions, Inc.

Important notice: You are leaving the Wells Fargo website